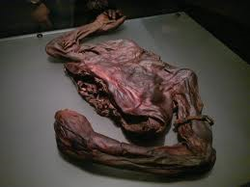 In May 2003 Kevin Barry made a huge discovery.
He was out on a bog not far away from our school making a drain with his digger. He unearthed a shape in the peat. He jumped off the digger and looked at the shape. It was a body with no head or legs. Immediately he rang the gardaí. The body was so well preserved in the bog that the gardaí thought it was a recent murder. It wasn't. It was very, very old.
​
The body turned out to be 2500 years old. He was given the name Old Croghan Man.

Scientists found out loads of things about him and another bog body called Clonycavan Man who was found in
Meath also in 2003.

Old Croghan Man was 6 feet 6 inches tall. Clonycavan man was 5 feet 2 inches and had a kind of hair gel to
make his hair stand up so he looked taller.
Both had been murdered long ago.Old Croghan Man was in his twenties. He would have been a giant back then as people were smaller those days. He was stabbed in the chest and his arms were cut.

He was tortured before he was killed. The most impressive thing about him was his hands. They were huge and very well preserved in the bog. His finger prints are very easily seen and he mustn't have done much hard work. The scientists examined his nails carefully and discovered that he ate good nutritional food, mostly meat and vegetables. He was probably killed by a new ruler as a sacrifice to their gods or because he was a rival.
His last meal was wheat and buttermilk. Scars on his lungs showed that he had pleurisy. Both bodies are in the National Museum in Dublin.﻿ 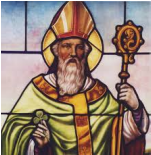 He was probably born in Wales. He was captured by the Niall Of The Nine Hostages and he was sold as a slave in Ireland. After a while he escaped and was ordained a priest and then a bishop.Then he heard the Irish people calling him to come back and teach them about Jesus. Patrick came to visit Croghan Hill. His horse jumped down the hill.

It is said that the well rose from the ground where the horse had landed. His horse knelt to drink from the well and left his kneeprint on a stone.The stone is still there and it is very unlucky to take it away
Big crowds still come to climb Croghan Hill on March 17th each year, this is called St.Patricks
Day. 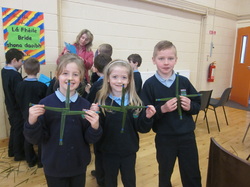 St.Brigid was caring to people and animals. She gave a hungry stray dog
a lamb chop that was for her fathers feast but another one appeared in time for the dinner.She also gave a beggar her
fathers sacred sword.
St.Brigid became a nun at Croghan Hill. She is known as Mary of the Gael. She received the veil from Bishop MacCaille on Croghan Hill. St.Brigid built a convent called the church of the oak in Kildare.

A cross of rushes is linked to Brigid as the shamrock is linked with St.Patrick.

She died in Kildare but her bones now rest beside St.Patrick and Colmcille at Downpatrick in County Down.