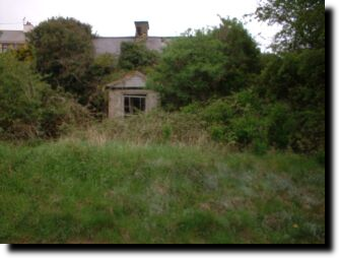 There is a long history of education in
Croghan. There was a hedge school in Coole run by Mr. Burke. This was during
the Penal Laws when Catholics were not allowed get an education. Mr. Burke was a
small farmer who died in Coole and is buried in Ballyburley graveyard.  In August 1835 a school opened in
Cannakill. Mr. Dunne was the first teacher and he taught at the hedge  school at High Gate before that. His
daughter taught at Cannakill and so did
Mr. Killian, Mr. Meagher and Mr. Casey. An English visitor Mr. Lewis
wrote about Cannakill school. He said that it was supported by local
contributions and attended by about 160 boys and 130 girls.

Next there was a school between Mícheál Casey's house and Peter Moore's house. It was made into a teacher's house after the new school was built. That new school is now Croghan Community Centre.

Croghan Community Centre was the local school until Scoil Bhríde was built in 1963. Master Quinn and Mrs. Glennon taught there. Master Fennesey lived in the old school and it became a ruin after he left the house. The house can be seen in the picture above.

In 1963 the present school was built.
Master Fennesey, Mrs Clarke and Mrs. Egan were the first teachers in this
school. When Mrs. Egan retired Mrs. Lynch came. In 1974 Mrs. Fallon replaced
Mrs. Lynch. Mr. Hickey became principal when Mrs. Clarke retired. Mrs. Greene
arrived to teach in Scoil Bhríde in 1993. In September 2000 Mrs. Doyle became a
fourth teacher in the school. Until that year there were only three classrooms.
She shared a prefab building with a learning support teacher Mr. O’Rourke who
also taught in Rhode and Ballybrian. In January 2003 Mrs. Butler joined Scoil
Bhríde as a shared resource teacher and taught in the prefab beside Mrs. Doyle.
In 2010 Mr. Hickey and Mrs. Fallon
retired. Mrs. Mc Namee joined the school as our new principal in January 2011.
Mr. Brady became the teacher of 5th and 6th class in
September 2011. 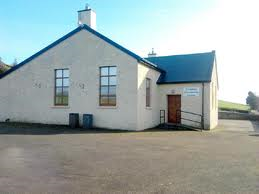 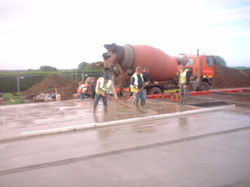 In 2009 an extension was built on to the
school. It included an assembly hall, kitchen, toilets, learning support room,
computer room, infant classroom, staffroom and office. The bishop came and
blessed the school. We have had some wonderful people taking care of the school
down through the years. John Hannon is our caretaker. He looks after
the school gardens, the football field and the school building. He is often seen
on a ladder getting our footballs off the roof. There are now 91 pupils in our
school. It is wonderful the advances that have been made in the school over 50
years. We are now hi-tech with interactive whiteboards and visualisers, a warm
welcoming school and lovely big playground. However one
thing has not changed in 50 years and that is that Scoil Bhríde is part
of Croghan community and what makes it special is the support of the parents and
wider community.